Some CIA-Vatican Killers Charged in Death of Victor Jara

It has taken almost 42 years for a small measure of justice for Víctor Jara.  42 years to overcome some of the evil, fear, stupidity and apathy infecting the nation of Chile and finally indict some of the lower-level men who tortured and murdered Víctor Jara and thousands more.

Jara's widow, Joan Turner Jara, told reporters that the development offers a "message of hope," and "we’re pushing forward in demanding justice for Víctor with the hope that justice will follow for everyone."

On the morning of 12 September, 1973, thousands of Chile's best and brightest men and women (and even some children) were rounded up and taken to the Chile National Stadium where they were brutally tortured and killed.  This occurred after the CIA orchestrated Coup that forcibly replaced Chile's democratically elected and popular President, Salvador Allende, with a military dictatorship headed by Augusto Pinochet.

Víctor Jara was certainly one of Chile's best and brightest. He was a beloved teacher, folk singer, playwright, and social activist who believed in democracy and human rights.

Víctor Jara was born in poverty in 1932 to Manuel Jara and Amanda Martínez. By the age of 6, Víctor was already working in the fields. His abusive father left the family to fend for itself when Víctor he was a young child and his mother died when he was 15.

After the death of his mother, Víctor joined the Redemptorist Seminary of San Bernardo. Quickly disillusioned with the church, he left as soon as was old enough to survive on his own.


In 1957 he entered the School of Theater of the University of Chile. In 1960 he was made theater director and joined the board of the Theatre Institute. He directed several plays and won the Golden Laurel Award for best director of the year. In 1967 he was invited to Britain, where he received another award for his stage direction.

In September 2003, the thirtieth anniversary of the military coup, the Chilean government renamed the stadium where Jara was killed with the name of Víctor Jara National Stadium.

One of the major forces behind the coup  was German Jew Henry Kissinger, who urged President Richard Nixon to overthrow the democratically elected Allende government immediately after the election of Allende in 1970.

A serial war-criminal, Kissinger had been warned by National Security Council deputy Viron Vaky, that overthrowing Chile's government would be "immoral" and that it would lead to "widespread violence and even insurrection."

Not a fan of democracy or human rights, Kissinger told Nixon "the election of Allende as president of Chile poses for us one of the most serious challenges ever faced in this hemisphere". By us, Kissinger meant multinational criminal corporations and their rabid right-wing politicians, not the American people. 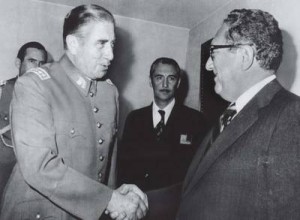 A month after Victor Jara's body was dumped in the street of a shanty town in Santiago, Kissinger was awarded the Nobel Peace prize his role in America's war against the people of Vietnam, which killed more than 3 million Vietnamese and 50,000 Americans.

While the coup that overthrew Chile's democratically elected and popular government was funded by the CIA and international corporations, the primary architects of the coup and subsequent fascist regime was the catholic cult Opus Dei.  The coup was planned by the Opus Dei think tank Institute for General Studies (IGS).  After the coup, many IGS technocrats became cabinet members and advisors to the ruling military junta.


Dictator Pinochet was a devout catholic and when confronted with his crimes in 2005 said "I suffer for these losses, but God does the deeds; He will pardon me if I exceeded in some, which I don't think I did.”

The Vatican support of the coup and the subsequent Opus Dei reign of terror was not an anomaly or a case of a few bad apples within the church.  Following Pinochet's arrest in 1998, Vatican secretary of state Cardinal Angelo Sodano, on behalf of the pope, sent a letter to the British government demanding the general's release.  Monsters such as Pinochet, or even Hitler, were never excommunicated by the church, while many of those advocating human rights and democracy were. 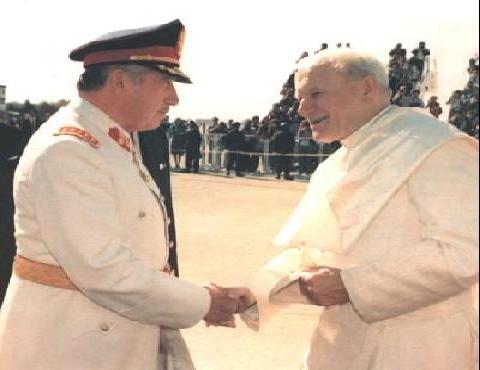 For more information about the many crimes of the Vatican and CIA please read the 2015 book "Operation Gladio" by Professor Paul L. Williams.  It is a must read for anyone who wants to better understand the recent past and current events.

Víctor Jara may have been killed but his songs and message live on, memorialized by artists and musicians across Latin America and around the world. He is also remembered by his wife in her book Victor: An Unfinished Song.

In "Manifesto," the last song he wrote before he was murdered, Jara declared:

I don’t sing for love of singing
or to show off my voice
but for the statements
made by my honest guitar
for its heart is of the earth
and like the dove it goes flying….
Yes, my guitar is a worker
shining and smelling of spring
my guitar is not for killers
greedy for money and power
but for the people who labor
so that the future may flower.
For a song takes on a meaning
when its own heart beat is strong
sung by a man who will die singing
truthfully singing his song.